There’s a reason why John Hughes shot so many films in Chicago. This metropolitan city is as cosmopolitan and internationally cultured as New York but comparatively underrated. It’s a city that has inspired more writers, innovators, and creators than anywhere else in the world, but it is often forgotten the impact Chicago has on some of the most renowned and famous people – people such as Frank Lloyd Wright, Mark Twain, and Orson Welles.

A couple of weeks ago, I had the chance to visit Chicago for a work trip. I hadn’t been back to the Windy City since 2008, when I fell in love with Chicago’s summertime pulse. I knew it would much different this time around and not just because it was 60 degrees colder.

Since I had previously visited Chicago and made my way to most of the touristy locations, I took the time to really feel out Chicago’s food scene. Don’t be fooled – Chicago has one of the most eclectic and best food scenes. It’s not just deep dish pizza here. And after New York City and San Francisco, Chicago is the third city in the U.S. with the most Michelin-starred restaurants.

First impressions – love the industrial feel which didn’t at all diminish the coziness of the shop. Large coffee bar, friendly and skillful baristas, and neat artwork.

If you like Chemex, V60, Siphon, and Cafe Solo, you will be satisfied with the offerings here. They also have espresso, cold brew iced coffee, loose leaf teas, iced tea, and my favorite – matcha latte. I had both the Chemex and their matcha latte, both were fantastic.

This is one of the most sought after reservations in town. And for good reason. The hype is truly, very real! I would strongly recommend making reservations because everyone wants to eat here.

The restaurant decor is as bold and globally influenced as their menu. The contrast between the industrial details with the rustic, exposed brick is well done. High ceilings, open kitchen, open restaurant – the restaurant gives off nothing but chill and cozy vibes despite their many accolades.

I tried five different dishes here (warning: do not read list if you are hungry): 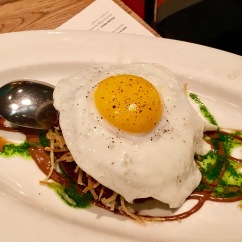 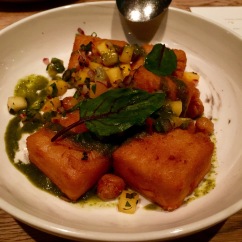 The roasted cauliflower, chickpea fritter, and pig face were my favorites. The menu has so much variety. There’s certainly Mediterranean influences but if you look closely at the ingredients, it’s all over the place. This place is not for the non-adventurers, the picky eaters. Everything on the menu is creative and speaks to Executive Chef Stephanie Izard’s spunk. Food is complex and well-executed, but none of it is pretentious or flashy. Flavors are well-balanced, which is quite surprising when you see the variety of dishes that exist on the menu.

Noted for several James Beard Awards, Best Chef of the Midwest, Jean Banchet Restaurant of the Year, and – of course – a one-star Michelin restaurant, Blackbird is another hot restaurant in Chicago. They’re renowned for their Midwestern, farm-fresh cuisine.

Given that most entrees are $50, this is not your average dine-out restaurant. But if you’re looking for a romantic night out or a business lunch to impress your clients and colleagues, look no further. The decor is minimalist and bright (in fact, they were given a James Beard Award for Best Restaurant Design and and Best Restaurant Design Graphics). The service, as you expect of a restaurant of this caliber, is impeccable. But let’s talk about their food.

The menu has everything from quail to king trumpet mushroom to sturgeon, duck breast, rabbit, and suckling pig. I decided to try their winter tasting menu, hoping to get bites of all the best Blackbird has to offer. Again warning – do not read list if you are hungry.

The tasting menu is $125 per person. For 10 courses, it may not be the most inexpensive meal but for what you’re getting at a restaurant of exceptional caliber, it’s a bargain. I have nothing but good things to say about each course. I especially liked the herbed chicken broth tea (which they bring out in a teapot and pour into glasses at your table) and the roasted squab with the pot pie. I was very impressed with the simplistic execution but complex notes of each beautifully plated dish.

The Lobby (the Peninsula) Afternoon Tea

I confess, I’m an afternoon tea enthusiast. Afternoon tea at the Peninsula is something I’ve always wanted to experience. The idea of sipping tea while munching on finger sandwiches and pastries is my idea of the perfect afternoon. Pair that with the Peninsula’s Lobby, which has 20-foot floor-to-ceiling windows, gold leaf-covered double-dome ceiling, hand-tufted carpet, gorgeous flower displays, and elegant table settings, and I was in utter bliss.

Traditional afternoon tea is $65, as of February 2017. I chose the mandarin rose petal, which is a scented black tea. Afternoon tea comes with a three-tiered stand of savory and sweet essentials. It also comes with traditional and mandarin orange scones with lemon curd, strawberry jam, and fresh cream.

The bottom tier contained a variety of sandwiches:

The middle tier housed parsnip soul with fennel and coffee beans. And the top tier held all the sweets:

All the sandwiches and pastries were delicious. I especially liked the scones, the cucumber sandwiches, and the passion fruit financier. As expected, the quality was exceptional and well-deserving of the Peninsula name.

I ordered the carnitas tacos and the vegetable caldo (meal-in-a-bowl soup). The tacos have guacamole, onions, and cilantro. They were really good and flavorful. I gobbled my tacos and instantly wanted more.

The real winner of the meal, however, was the caldo. Typically, I don’t order veggie soups at restaurants since they’re usually bland and devoid of ingredients. This veggie soup, however, was fantastic. It had black beans, zucchini, mushrooms, potato-masa dumplings, avocado, serrano chile, and other greens. All for $10.50. It was very filling, and it tasted so, so good. I was very surprised at how hearty and delicious this caldo was. It really is a meal in a bowl of soup. The perfect dish for a cold day in the Windy City.

I would absolutely come here again. And I wish there was one where I lived. I know Rick Bayless is a prominent chef in the Chicago area, especially with the popular Frontera Grill and Topolobampo. Xoco is a great addition to his restaurants.

One can’t take a trip to Chicago without trying some deep dish pizza. Founded in the ’70s and hailed as the “Best Chicago Deep dish Pizza Restaurant,” Lou Malnati’s is recognized as one of the most iconic restaurants in Chicago. Lou Malnati’s is considered the oldest family name in Chicago pizza history.

I came here for a “quick” lunch – “quick” because their deep dish pizza takes 30-45 minutes to make from the time you place your order. Each pizza is handmade from scratch, so the quality of the ingredients is very fresh. It’s a very hearty pizza and one that you need to eat with a fork and knife. I ordered the Malnati Chicago Classic, which is made with their lean sausage, extra cheese, and vine-ripened tomato sauce on their famous crust.

Too much good food in Chicago, my wallet almost broke. Nevertheless, I will be back to eat and drink more. See you later, Chi-Town!